The Brazilian Biogas Association (ABiogás) forecasts the production of 30 million m³ per day by 2030 and still, this estimate seems rather conservative. The expansion of the local biogas market means more than just economic gains, it contributes significantly to bringing the country closer to its greenhouse gas reduction targets as laid down by the Paris Agreement. Many nations are expected to present more ambitious goals at the UN Climate Conference (COP 26) and Brazil has a key role to play given that it currently ranks sixth in emissions worldwide.

According to the Brazilian energy matrix, more than 85% of electricity comes from renewable sources, with about 65% generated from hydropower. Other significant sources are wind at almost 9%, and biomass, which includes bioelectricity generated from sugarcane bagasse, summing up to around 8%.

Even though the Brazilian energy matrix is largely made of renewables. Hydro’s participation is set to decrease as a result of curbs on new hydropower projects. According to plans outlined by the Energy Research Office (EPE) for coming decades, thermal power plants (TPPs) using natural gas as fuel that currently account for approximately 9% of electricity generation, are expected to play an increasing role,

The increasing participation of gas-fired TPPs is driving a series of concerns. Expanded participation of intermittent energy sources such as wind and solar will require the activation of TPPs to balance the market. Biogas and biomass can play this role, without increasing emissions.

Emissions emanating from ttransport are responsible for large share of emissions, resulting in the Brazilian energy matrix to be composed of over 50% from fossil sources. Biogas can play an interesting role in decarbonising the transport sector, as it can be used for fuel heavy vehicles and agricultural machinery.

Biomethane, obtained by purifying biogas, is equivalent to and interchangeable with fossil natural gas, and can be used in exactly the same applications. Its great advantage is to be 100% renewable, and it does not increase GHG emissions into the environment. By replacing fossil fuels, biomethane contributes to reducing total emissions, and has a negative emission balance, a fact already acknowledged by programs such as California’s Low Carbon Fuel Standard.

Brazil enjoys the world’s greatest potential for biogas production. That potential refers to all available organic residues, particularly those from agriculture, animal manure and sanitation that are currently not being used to produce energy, or are improperly disposed of in nature. These inputs are available throughout the country, favoring decentralized fuel and electricity generation.

If all these residues were used, they could replace 70% of diesel consumption, or 34.5% of Brazil’s demand for electricity. In the country’s hinterlands, where agriculture plays a large role, biogas is the most efficient way to ensure sustainable production by generating clean energy and renewable fuels within farms.

In terms of logistics, biomethane is a storable fuel that can be compressed and liquefied, generating renewable compressed natural gas or renewable liquefied natural gas. These can  then be transported to supply large industrial customers or sold as vehicle-fuel. Such infrastructure ensures quick and efficient fuel delivery, while the construction of a new gas pipeline requires large investments and a long construction time, up to five years. Biogas’ great strategic advantage is its decentralization, allowing the market to develop in areas that are not integrated with pipelines and paving the way for future integration.

The sugarcane industry represents a large opportunity for biogas generation, as much as 57.6 million m³/day of biogas. New production technologies, with the use of residues such as vinasse and filter cake, promise ethanol plants self-sufficiency. One example is the Raízen Geo Biogas plant, one of the largest in the world, inaugurated last year with an installed capacity of 21 MW. With more than 5 million tons of sugarcane crushed every year,generating residues for commercial scale project. The vinasse will be handled uring the crop season and filter cake will be handled throughout the year. This combination will lead to the production of 138,000 MWh, boosting the plant’s energy yield by 50% per metric ton of sugarcane.

There are currently 381 ethanol plants in Brazil, mostly in the Southeast, that are expected to invest in biogas, ensuring sustainability throughout the production chain. RenovaBio, the national biofuels policy, will provide great support for this development by rewarding low carbon fuels through CBIOs, carbon credits traded on the stock exchange.

Biogas’ positive externalities must be correctly priced within the development of a country’s energy policy. Amongst its benefits are GHG emissions reduction and its storability and flexiblility, both as electricity and fuel. It is a non-intermittent renewable energy source, which can contribute to balance intake from other sources (such as solar and wind) within the system, without increasing dependence on TPPs that run on fossil fuels.

Biogas has every condition to achieve greater participation in the Brazilian energy matrix. Biogas’ representativeness is still small – less than 0.1% of the energy matrix – and only 2% of its enormous potential is used. However, its growth curve shows vertiginous expansion in recent years and a promising outlook for years to come.

Improvements in state legislation and industry-level milestones, including the opening of the gas market, RenovaBio, the legal sanitation framework, and modernization of the electricity sector, will provide incentives for biogas. The Biofuels program, RenovaBio, allows biomethane producers to generate carbon credits and will encourage the production of ever greener ethanol.

The use of sugarcane industry’s residue to produce biogas is a turning point for the industry, as was the case with cogeneration in the 2000s. Biogas represents the opportunity to expand renewable energy generation without any increase to the use of land in sugarcane production, as well as an opportunity to completely replace all diesel consumed by mills, thereby reducing one of the industry’s highest operating costs.

Brazil already has major projects that prove the reliability and efficiency of technologies deployed to produce and use biogas and biomethane. In the transport sector, we observe some big moves: Scania, which already manufactures trucks powered by natural gas or biomethane at its factory in São Bernardo do Campo, has already sold 70 vehicles, and New Holland should start selling gas-powered tractors next year.

In addition to the Raízen Geo Biogas project in the sugarcane sector, Gás Brasiliano and Cocal’s Sustainable Cities project will implement a dedicated gas pipeline that will benefit 230,000 people in the Narandiba, Pirapozinho, and Presidente Prudente municipalities, carrying biomethane produced from vinasse, bagasse, and sugarcane straw. The project is scheduled to start operations on the second semester of this year. Adecoagro, São Martinho, Jalles Machado, and Tereos are other pioneering mills investing in biogas.

There is no doubt that the future of biogas has already begun and that by 2030 it will achieve a significant share of the Brazilian energy matrix. We will all benefit from the resulting cleaner environment, economic and social development, and job creation. 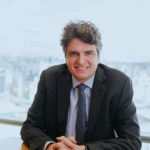 Alessandro Gardemann holds a degree in Business Administration from EAESP-FGV, with five years of experience in the financial market. In 2008, he founded Geo Energética and since then has been dedicated to Biogas. He was one of the founders of the Brazilian Biogas Association (ABiogás), where he is currently the president.